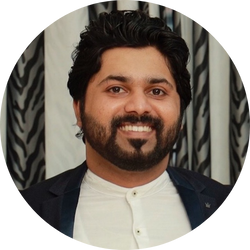 Nirmal Abraham is a Management Professor, Columnist and HR Trainer who has adjudicated several competitive events in the domain of Business, Law & Entrepreneurship in India. During the course of his 9-year industry career, he has worked closely with various Indian and International Conglomerates, Consultants, and Banks - assisting them in evaluating financial records, preparing audit reports, formulating budgets and ensuring compliance.

Besides being an MBA Entrance Rank Holder and a National Level Debate Champion, Nirmal has won over 40 ‘Best Management Student’ (Best Manager) awards across India during his academic life, titles of which include triumphs from Symbiosis University (Bangalore), Christ University (Bangalore), Loyola College (Chennai), Alliance University (Bangalore), M.S Ramaiah University (Bangalore), SDMIMD (Mysore) and Rajagiri Business School (Kochi). He was also crowned ‘The Best CEO’ in the Business Simulation event ‘Wargasm’ held at Symbiosis University in 2017, where candidates from several IIM’s also participated. Before getting recognized in the Media, he gained expertise in the fields of Public Relations, Marketing, and Recruitment Training - working with an Indian Unicorn and later with a prominent consultancy firm - after which he started providing independent services to clients both in and outside of India. Spearheading over 400 training sessions across disciplines in Indian academia and industry, Nirmal has contributed to the progress and enhancement of thousands of young talents, making him one of the most acclaimed trainers in the country. He frequently appears as an Analyst on discussions pertaining to Business, Trade, Politics, and International Affairs in the following South Indian media outlets: